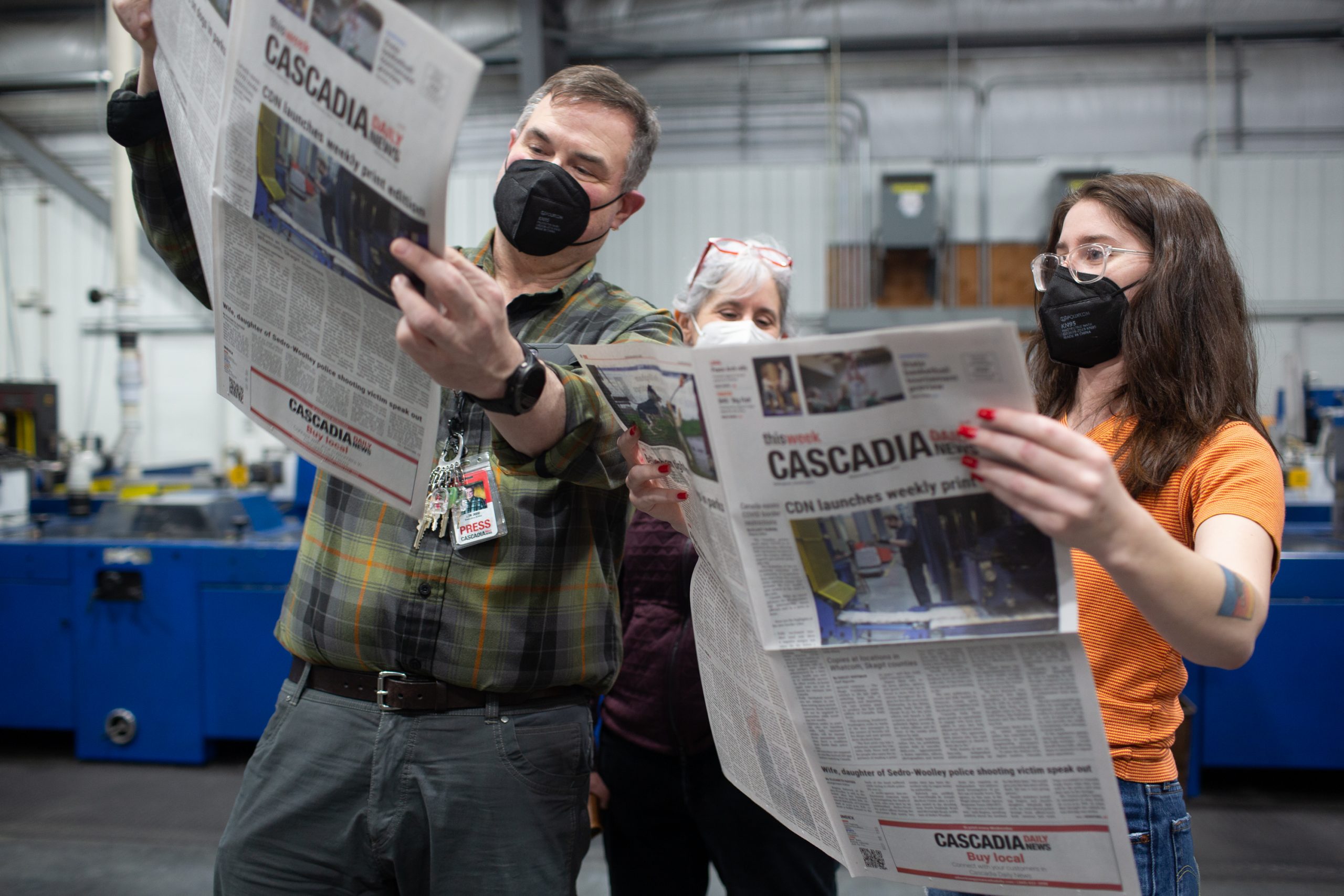 BELLINGHAM—Against the odds and bucking national trends, a dozen journalists employed at Cascadia Daily News began publishing a fresh, enterprising newspaper from a newly constructed newsroom in January — rising from the ashes of an industry in crisis.

CDN started publishing news online at cascadiadaily.com from its downtown Bellingham newsroom Jan. 24. On March 2, the first-ever print copies of Cascadia Daily News became available — for free, during an introductory period — at about 50 locations throughout Bellingham and Whatcom and Skagit counties.

Consumers have already responded positively. Local news and sports coverage have been atop the list of popular content on CDN, with opinion columns and arts and entertainment articles also popular.

“Hardly a day goes by that we don’t get positive feedback from our readers,” said Ron C. Judd, executive editor of Cascadia Daily News. “It has been very encouraging and rewarding, and seems to reflect the local thirst for a fresh, independent news voice.”

A veteran Northwest journalist, Judd said it feels great to help produce quality online content and now a printed paper that people can hold in their hands and take out for lunch.

“The first print run was a milestone moment for Cascadia Daily News staff and for people who enjoy the experience of reading a printed paper,” said Judd, adding that the print paper gives his news staff opportunities to tell stories in ways that don’t translate as well in digital media.

By publishing online daily and in print weekly, CDN aims to push back against trends that show an industry in decline across the nation during an era of hedge fund-controlled media chain downsizing.

A report published by researchers at the University of North Carolina estimated that approximately 100 papers close per year in the United States. The Pew Research Center also reports that the number of reporters, editors and photographers in the newspaper industry has decreased 57% since 2004.

A range of nonprofit local news sites has sprung up to help fill this void, but most lack the resources to employ fulltime journalists in a way that recreates the valued community connections of a traditional local newspaper.

Despite seemingly grim statistics, Cascadia Daily News journalists have their feet on the ground and are working to help people of all ages better understand and appreciate the critical role played by credible and comprehensive news organizations in the communities they serve. They are showing the community what they’ve been missing.

Judd reports that engagement with the market has been impressive so far.

“CDN’s tip line has been buzzing, and a lot of our most-popular stories are springing from direct interaction with local citizens,” he said.

The flow of letters to the editor and guest commentaries also has been strong, with many arriving in CDN offices even before the newspaper began publishing online in January. That’s a sign of pent-up demand for a newspaper providing a true local public forum, Judd said.

The broad vision and startup funding for Cascadia Daily News comes from David Syre, a fourth-generation Whatcom County resident who has a long history of contributing and investing in the community.

Syre is the sole owner of Cascadia Newspaper Company, which publishes Cascadia Daily News, and he hopes the public will participate in this local news adventure.

“Cascadia Daily News gives people an opportunity to engage with local journalists in ways that help educate and inform others,” Syre said. “We appreciate each person who has read the newspaper, subscribed or shared a news tip so far.”

Around the country, newspapers have been in decline. However, the need for robust local journalism that holds government to account and lifts communities remains as vital as ever. Recently, the International Center for Journalists put forward a handful of business models that could save journalism. In its success, Cascadia Daily News has seized on several of those models to buck national trends: subscriptions, donor funding, and, most important, quality journalism.

“I responded to a need for expanded local news coverage that was voiced by the residents of our area,” Syre said. “We are in this together.”

The Pacific Northwest needs great journalism. Cascadia Daily News has placed itself on a path to success by focusing on reporting the news people need, care about and respond to — and by doing it well.